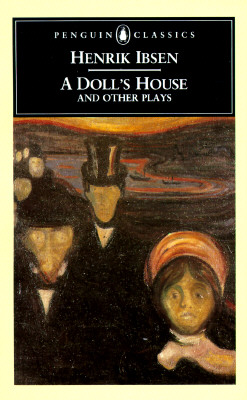 A Doll's House and Other Plays (Penguin Classics)

Delivering three distinct and powerful visions of characters who choose to defy convention in the pursuit of happiness, Henrik Ibsen's A Doll's House and Other Plays is translated with an introduction by Peter Watts in Penguin Classics.
The League of Youth was Ibsen's first venture into realistic social drama and marks a turning-point in his style. By 1879 Ibsen was convinced that women suffer an inevitable violation of their personalities within the context of marriage. In A Doll's House, Ibsen caused a sensation with the his portrayal of Nora Helmer, a woman who, gradually arriving at an understanding of her own misery, struggles to break free from the stifling confines of her marriage. Continuing the theme of tensions within the family in The Lady from the Sea, Ibsen put forward the view that freedom with responsibility might at least be a step in the right direction. Peter Watts's lively modern translation is accompanied by an introduction examining Ibsen's life and times, with individual discussions of each of the three plays.
For more than seventy years, Penguin has been the leading publisher of classic literature in the English-speaking world. With more than 1,700 titles, Penguin Classics represents a global bookshelf of the best works throughout history and across genres and disciplines. Readers trust the series to provide authoritative texts enhanced by introductions and notes by distinguished scholars and contemporary authors, as well as up-to-date translations by award-winning translators.

Title: A Doll's House and Other Plays (Penguin Classics)

A Doll's House and Other Plays (Penguin Classics)