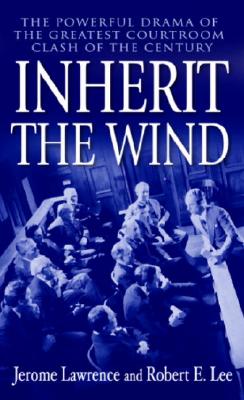 Inherit the Wind: The Powerful Drama of the Greatest Courtroom Clash of the Century

A classic work of American theatre, based on the Scopes Monkey Trial of 1925, which pitted Clarence Darrow against William Jennings Bryan in defense of a schoolteacher accused of teaching the theory of evolution

The accused was a slight, frightened man who had deliberately broken the law. His trial was a Roman circus. The chief gladiators were two great legal giants of the century. Like two bull elephants locked in mortal combat, they bellowed and roared imprecations and abuse. The spectators sat uneasily in the sweltering heat with murder in their hearts, barely able to restrain themselves. At stake was the freedom of every American. One of the most moving and meaningful plays of our generation. Praise for Inherit the Wind "A tidal wave of a drama."--New York World-Telegram And Sun "Jerome Lawrence and Robert E. Lee were classic Broadway scribes who knew how to crank out serious plays for thinking Americans. . . . Inherit the Wind is a perpetually prescient courtroom battle over the legality of teaching evolution. . . . We're still arguing this case-all the way to the White House."--Chicago Tribune "Powerful . . . a crackling good courtroom play . . . that] provides two of the juiciest roles in American theater."--Copley News Service " This] historical drama . . . deserves respect."--The Columbus Dispatch

Title: Inherit the Wind: The Powerful Drama of the Greatest Courtroom Clash of the Century

Inherit the Wind: The Powerful Drama of the Greatest Courtroom Clash of the Century