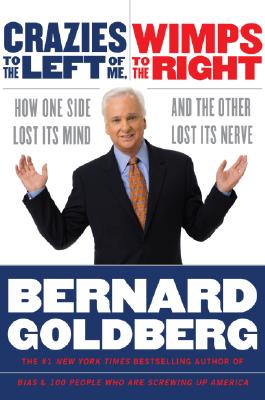 Crazies to the Left of Me, Wimps to the Right: How One Side Lost Its Mind and the Other Lost Its Nerve

The number one New York Times bestselling author Bernard Goldberg is back with more hard-hitting observations and no-nonsense advice for saving America from the lunatics on the Left and the sellouts on the Right.

In Crazies to the Left of Me, Wimps to the Right, Goldberg speaks for the millions of Americans who are saying: Enough

Enough of lunatics like Rosie O'Donnell who think "Radical Christianity"--whatever that means--is "as big a threat to America as Radical Islam." Enough of the hyperbolic liberal rhetoric comparing Bush to Hitler and Abu Ghraib to a Saddam Hussein torture chamber. Enough of the liberal media, in particular the New York Times, which Goldberg claims doesn't publish "all the news that's fit to print" so much as "all the news that fits our ideology." And please, enough of the military-hating crazies who run San Francisco ("Just what this country needs," Goldberg writes, "a city with Rice-A-Roni and a foreign policy.")

But Goldberg doesn't stop with the crazies on the Left. Speaking for fed-up conservatives, he also goes after the wimps on the Right--the gutless wonders in Washington who sold out their principles for power.

He's had it with hypocritical Republicans who say they're for small government but then spend our hard-earned tax money like Imelda Marcos in a shoe store. He's also had it with the weak and timid Republicans who won't stand up and fight against racial preferences, too afraid that the Al Sharptons and Jesse Jacksons of the world will call them bigots. In plain English, he's had it with Republicans who are afraid to be conservative

In his most personal, provocative book yet, Bernard Goldberg argues that while conservatives still believe in important things, the jury is out on Republicans. The 2006 election was a wake-up call, he warns, and if the wimps on the Right fail to regain their courage, recover their principles, and reclaim their sense of fiscal responsibility, the crazies on the Left just might win the White House in 2008.

Title: Crazies to the Left of Me, Wimps to the Right: How One Side Lost Its Mind and the Other Lost Its Nerve

Crazies to the Left of Me, Wimps to the Right: How One Side Lost Its Mind and the Other Lost Its Nerve