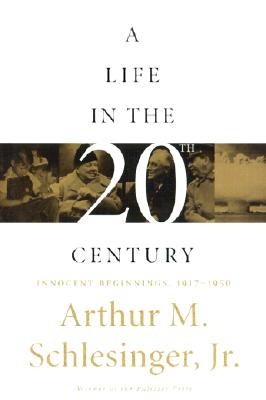 As a preeminent historian of our time, Arthur M. Schlesinger, Jr., continues in his many books and articles to show Americans who we are as a nation, to explain our past, and to illuminate possibilities for the future. But here, in the first volume of his long-awaited memoirs, he turns his acute historian's eye on his own past. In the elegant and witty language of one of our most readable writers, Schlesinger artfully reconstructs a twentieth-century life.
Schlesinger's personal story is ultimately the captivating history of America coming into its own as a world power. It includes a fondly remembered childhood in the Midwest; life in America of the twenties; student days at Harvard, lived in the shadow of a distinguished father; Cambridge University in England in the twilight year between the Munich Pact and the start of World War II; the bitter debate in the United States in the months before Pearl Harbor; a stint overseas with the Office of Strategic Services; the fate of postwar liberalism, under attack from right and left; the origins of The Vital Center. Here is a dramatic evocation of the struggles, the questions, the paradoxes, and the triumphs that shaped our era.
Interweaving personal and national stories, Schlesinger conjures up the colorful details of everyday life, offering readers a rare and revealing window on both the private world of a notable American writer and the innocent beginnings of the American century. A LIFE IN THE TWENTIETH CENTURY: INNOCENT BEGINNINGS, 1917 -- 1950 is destined to become a classic.