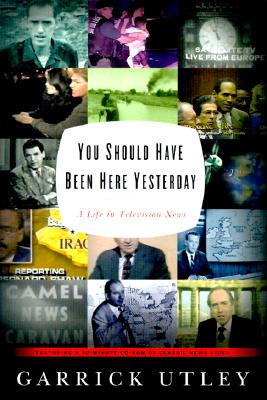 You Should Have Been Here Yesterday: A Life Story in Television News

A memoir - in print and on a DVD disc - of a life in front of the cameras and of the evolution of television news by one of America's leading TV journalists. A generation of television viewers grew up watching Garrick Utley as he trekked to the far reaches of the Earth for NBC News. What is life as a foreign correspondent really like? Is it all glamour and adventure? In this memoir, Utley reveals what life is like behind the camera. He takes us from the battlefields of Vietnam to the backwaters of Belize, from communist Russia to revolutionary Rhodesia, in search of the most riveting, most important news stories out there. But Utley's story is far more than a personal memoir - it's a sweeping history of network news. Utley reflects, in particular, on how the correspondent's role has shifted as centralized control, advanced technology, infotainment, and profit margin have altered the way television networks operate and television news is reported.

Title: You Should Have Been Here Yesterday: A Life Story in Television News

You Should Have Been Here Yesterday: A Life Story in Television News