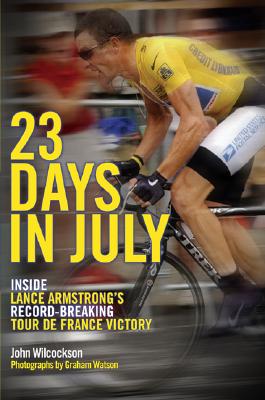 In July 2004, Lance Armstrong will attempt to achieve what no other cyclist has ever done-win a sixth Tour de France. The most grueling athletic event in the world, the Tour de France takes place over 23 days every July across more than 2,000 miles. From punishing mountainous terrain to flat blacktop, cyclists push their bodies to the limit to win the greatest prize in cycling.John Wilcockson is the perfect writer to tell this story-he has covered the Tour de France for the past 35 years. But 23 Days in July will be more than just a day-by-day account of the race. Wilcockson will bring together engaging nuggets of history, set up each day's race with vivid descriptions of the geography, and highlight the mental as well as the physical battle among the four principal contenders-Lance Armstrong, Tyler Hamilton, Jan Ullrich, and Joseba Beloki-with whom he will be in constant contact. Woven into the narrative will be their compelling personal stories, their preparations for the race, and their training regimens, all giving new insight into the human side of the Tour de France.With two 8-page photo inserts by the world's premier cycling photographer, Graham Watson, and featuring interviews with the Tour's only other five-time winners still alive-Belgian Eddy Merckx, Frenchman Bernard Hinault, and Spaniard Miguel Indurain- 23 Days in July will capture the rich history, nationalistic fervor, and diverse geographic challenges of the most dramatic athletic event in the world.