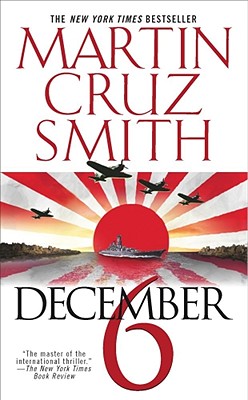 From the "New York Times "bestselling author of "Gorky Park" and "Havana Bay" comes another gripping novel of loyalty, betrayal, and intrigue on the eve of the greatest military conflict in the history of mankind.... DECEMBER 6

Amid the imperialist fervor of late 1941 Tokyo, Harry Niles is a man with a mission -- self-preservation. But Niles was raised by missionary parents and educated in the shadows of Tokyo's underworld -- making his loyalties as dubious as his business dealings.

Now, on the eve of the attack on Pearl Harbor, Niles must decide where his true allegiances lie, as he tries to juggle his Japanese mistress and an adulterous affair with the wife of a British diplomat; avoid a modern-day samurai who is honor-bound to kill him; and survive the machinations of the Japanese high command, whose plans for conquest may just dictate his survival.

Set in a maelstrom of personal temptations and mortal enemies, with a remarkable anti-hero caught in a land he can never call his own, "DECEMBER 6" is a triumph of imagination, history, and riveting storytelling.