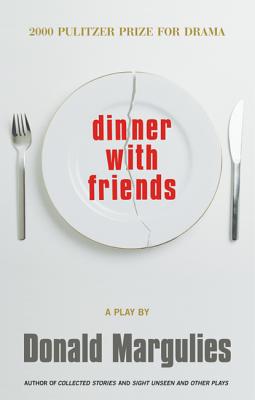 Winner of the 2000 Pulitzer Prize for Drama

"In pondering issues of intimacy, passion and the pleasure and dolors of conjugal routine, Margulies writes about relationships with such intelligence and spiky humor that his comedy-drama...becomes something quite wonderful." -William Tynan, Time "A true feast. Dinner with Friends is sober, wise and extremely funny...Mr. Margulies writes with elegance and wit about intimacy, trust, privacy and the toll of time and monogamy on sexual passion, matters that aren't easily expressed in dramatic dialogue." -Vincent Canby, New York Times "The complexities of marriage and friendship are dissected with wit and intelligence in Dinner with Friends. At once tender and disturbing... drawn with an intriguing psychological complexity that feels quietly real. Margulies depicts the vagaries of spousal relationships with humor and pathos in an insightful manner that will undoubtedly spur meaningful conversations between couples." -Frank Scheck, Hollywood Reporter Filled with humor, warmth, insight and wisdom, Dinner with Friends is a modern day masterpiece on the destruction of today's marriage. Through Margulies's flawless use of language and his ability to convey the truest of dialogue and characterization, we watch, as the two couples do, our closest friends going through a wrenching breakup. Not only does he create vivid detail of a marriage in decline, he also brilliantly depicts the couple's closest friends, and how this new mirror to their own marriage sends them through a whirlwind of raw emotion and self-reflection. Donald Margulies received the 2000 Pulitzer Prize for Drama for Dinner with Friends. The play received numerous awards, including the American Theatre Critics Association New Play Award, the Dramatists Guild/Hull-Warriner Award, the Lucille Lortel Award, the Outer Critics Circle Award and a Drama Desk nomination, and has been produced all over the United States and around the world. In addition to his adaptation of God of Vengeance, his many plays include Collected Stories, The Country House, Sight Unseen, The Model Apartment, The Loman Family Picnic, What's Wrong with This Picture? and Time Stands Still. Mr. Margulies currently lives with his wife and their son in New Haven, Connecticut, where he teaches playwriting at Yale University.